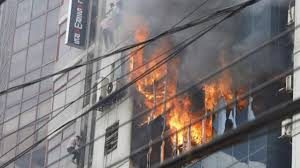 Fire accident in Bangladesh is a great concern nowadays. Very frequently the fire accident is happening in the country. It is killing people and destroying valuable asset. Not only that it is destroying a family. It is making unexpected burn injury which is very miserable. How long it will continue?

Definitely the government agency cannot deny their responsibility. Enough law is there to prevent or minimize fire accident but due to negligence and corruption in the agencies it is still happening very frequently. Lac of monitoring and establishment of judgement for the offenders it is happening. So, government cannot refuge their failure in this incidents.

There is a proverb that prevention is better than cure. During the building construction period developer or building owner should establish this kind of preventive measures. These are establishing fire fighting equipment throughout the building, fire extinguisher, hydrant, reserve water facilities and finally assigning a fire officer or safety officer for the building by providing him proper safety training.

Though some buildings have those facilities but most of the cases there is no designated fire or safety officer for the building. That’s why fire is not controlled in the emergency cases. There should be smoke detector or alarming system which can help people to exit rapidly in emergency cases. However there should have enough emergence exit ways also.

There are few ISO standards like ISO 14001 and ISO 45001 which can be good guidelines for building owners or developers to control the fire. The different between the government fire law and ISO standard is monitoring system. If any company adopt those standard then the Certification Body(CB) auditors contribute a lot.

Before certification they do the gap analysis and suggest what to do according to the ISO standard for minimization of fire accident. After establishing those system in the building the company can achieve the certificate.

ISO 14001 and ISO 45001 standard is becoming more popular to save our environment and save people’s health. To prevent accident inside the building both standards can be a very effective tools who wants to control fire accident.

e-waste management in bangladesh is very critical condition. There is no policy and plan yet though 15% of total e-waste of the world is being producing here.

Celebration of Digital world is going on. It is started on 9 Feb and will end on 12 Feb 2015. On behalf of Digital World 2015 a seminar was organized on e-Waste management and it’s challenges in the Bangabandhu Convention center today on Feb 11, 2015. I was attended on the conference. Many important discussions and proposals have come out from the discussion. Causes of e-waste were disclosed by the panelists and guests who were present in the meeting.  Possible ways to face this challenge was also discussed.

Lets’s know what is e-Waste? Though there is no specific definition of e-waste but we can say those electric and electronics product which are used in household and business purpose and have reached in  end of its useful life can be defined as e-waste.

Though worldwide in many countries there are policy for e-waste management but in Bangladesh it is still is vulnerable condition. From the policymaker and from Ministry of Environment of Bangladesh there is no policy and objective is introduced about this serious environmental aspect.

It is a matter of frustration that from the government official who are in the power nobody was present in this important symposium. From the meeting many things were identified. However, we hope government will take master plan to manage e-waste management policy. In 2011 some proposals were come from DOE by Fazle Rabbi but still there is no any implementation process yet. It shows government’s negligence about e-waste management in Bangladesh.

According to Eng Mr Shariar’s statement  around 3 hundred thousand metric ton of e-waste are producing  domestically and another 7 hundred  hundred thousand comes from import most of them are illegal and unauthorized expired e-wastes. So, total around one million metric ton e-waste is going to stock in Bangladesh which is around 15% of total e-waste of the world. It is really a great concern for a under developed and small country Bangladesh.

Various kinds of electric and electronic products including mobile phone, computer, old ship, computer used car, equipments and machinery etc are the major parts of producing ewaste in the country.  Around  two million mobile set are importing according to Mr. Mahbub’s statement.

Around 30 kinds of hazardous components are found in those ewaste. Among them Cadmium, chromium, Lead and mercury are most harmful component. Those are polluting our land, water and finally public health.

Mr Subhan said”in the air of Dhaka the quantity of Lead is 463 which is much lower in Bombay 360 and in Mexico it is 383 mili micron” So, still Dhaka is the most polluted city among others in the world. In this regard Bangladesh government should stop import used car from Japan to reduce the lead level in Dhaka’s air.

From the discussion it was come out that the following things are responsible of making ewaste in the country:

As an ISO Lead auditor I can suggest to government to introduce regulation for mobile, computer, used car, electronics and electrical products importers, ship breakers for adopting EMS/ISO 14001 Standard which is the international guideline for managing e-waste effectively.  Advanced Assessment Services is the authorized Certification Body Agent in Bangladesh who are providing Environmental Management System Certificate at the lowest price. You can contact with the company here

What is ISO 14001 Certification

What is iso 14001 Certification post is a informative post for them who are interested to know about the basic of the ISO 14001 Standard. IT  is also known as Environmental Management System Standard or EMS Standard. It is one of the most important standards to protect our environment living friendly. Air pollution, water  pollution, soil pollution and sound pollution are the major concerns around the world. In this regard ISO 14001 Standard can be a good guideline to minimize the pollution level of those environmental aspects.

Who needs this EMS standard?

Now air pollution is one of the major problems caused by unplanned industrialization and most of them have conducted by developed countries. Now due to air pollution many killer diseases including asthma, heart diseases, bronchitis, brain diseases, cancer are killing huge number of people throughout the world.

If ISO 14001 Standard is implemented properly in the harmful industries this air pollution can be reduced significantly. Recent article about air pollution in Honkong is reminding us how important  to implement this Environmental standard in industries to save our earth.

As an ISO auditor my suggestion is that government from each country should pass law in their national assembly to adopt this ems standard in all kinds of industries specially which have bad effect on environment. In this regard importers and international organization can impose condition on manufacturers or exporters to implement ISO Standard for saving our environment for our future generation.

There are four major clauses in the standard. Technical all guidelines can be found from the clause 4. According to  the clause 4 you will have to set some procedures to finding aspects and controlling method of impact creating from your industry. How and who will does what everything will be written in those procedures.

According to the standard you will determine what the impact status on environment and after knowing that you will have to set target to reduce the impact causing by your industry.

Power consumption can also be controlled from this standard. Using generator is the major concern in power shortening countries like Bangladesh. Workers and environment both are affected from this electric generation machine. Implementing ISO 14001 requirements can help to control this very noisy equipment in your industry means you are trying to reduce the affect of generator both for men and environment.

Waste management which is very important to keep our environment clean and healthy. From this 14001 standard you can learn how to manage your industrial wastes efficiently.

Sulfurdioxide, nitrus oxide, carbondioxide etc are toxic gas which are main causes of raising temperature of the environment. When you will be ISO 14001 Certified company you will have to control those gases created from your industry.

Different kinds of organizations including plastic, chemicals, garments, textiles, tannery, pharmaceuticals, chemical, power generation and others can adopt this standard. Who are serious about the environment and saving their power and interested to  do waste management it is the right standard for them.

ISO 14001 is the standard for environmental management system. Around the world more than 223, 500 companies are ISO 14001 Certified. It is in second position for popularity among other ISO standards. Gradually peoples are engaging with this standard. Now our environment is in great risk. So, it is proper time for those industries who are affecting our environment from their production process in various industrial sectors.

ISO 14001 Standard shows the framework for companies who are interested to obtain environmental management system certificate in Bangladesh.This is the  second most popular  ISO standard. It can be adopted by any kinds of organization regardless of its activity or sector. ISO 14001 certified means it ensures that environmental impact of the company is being measured and improved continuously.

How to get EMS Certificate?

The certification process is like ISO 9001 Certification. You have to prepare some ems documents including ems policy, manual, procedures, setting aspect and impact, doing internal audit, management review meeting etc. In this regard an EMS Consultant can help you to prepare those documents. The best way is collect the standard 14001 and read it yourself what the guideline is and then you can also try to prepare those required documents by yourself.

It is not difficult to get ISO 14001 Certification in Bangladesh. When you are ready and the implementation process is ongoing condition then EMS audit or third party certification audit can be performed. If there is no Nonconformity then you will be selected to obtain EMS certificate. However if there is any issue or nonconformity then corrective action will be required. When your corrective action will be accepted then EMS or ISO 14001 Certificate will be issued for you.

How to select 14001 Certification Body?